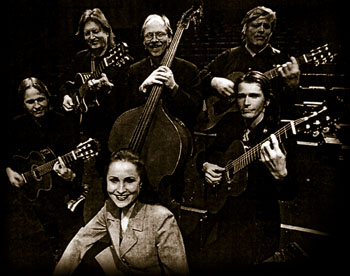 The group Jättiläinen (“The Giant”) stems back to the Jyväskylä Municipal Theatre’s 1988 production of the musical “Gypsies Are Found Near Heaven”. To create more of agenuine gypsy camp feel, real live guitarists and singers were needed on stage. At the conductor’s request we obliged – and didn’t leave the stage for the following three years. The singing and dancing did not cease even after the musical itself was laid to rest.

The 5-member core line-up of Jättiläinen consists of Jouni Innilä, Kari Kantonen, Ykä Mattila, Sari Moilanen, and Seppo Niemi. They are often joined on stage by dancers or other singers and musicians, sometimes more than doubling the total number of personnel.

Initially, Jättiläinen’s repertoire was mostly made of the songs from the gypsy musical, but soon incorporated Finnish and Carelian folk songs. Gradually the set expanded into including songs from Greece, Ireland, Siberia and Scandinavia, as well as many international folk, country, rock, and pop songs. The band members also write many of their own songs, and these compositions have been the basis of separate concerts based on the poems by Aale Tynni, Dan Andersson, as well as a children’s concert based on finnish-language poems of Hungarian origin. One of Jättiläinen’s most popular sets comprises Vladimir Vysotsky’s deeply touching songs translated into finnish.

Apart from the regular concerts, Jättiläinen is often booked for various festive occasions and private functions.